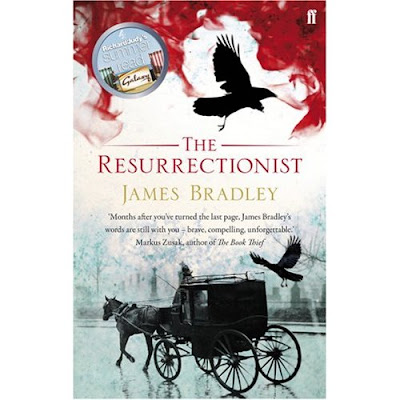 I bought this book in England last summer and was excited to start reading it. I don’t believe that it is sold in Canada (it wasn’t on amazon anyway. Bookoffers.com describes the book, “London, 1826: Gabriel Swift has left behind his father’s failures to study with Edwin Poll, the greatest of the city’s anatomists. It is his chance to find advancement by making a name for himself. But instead he finds himself drawn to his master’s nemesis, Lucan, the most powerful of the city’s resurrectionists and ruler of its trade in stolen bodies. Dismissed by his master, Gabriel descends into the violence and corruption of London’s underworld, a place where everything and everyone is for sale, and where – as Gabriel discovers – the taking of a life is easier than it might seem.”

This book was really fun to read in the beginning. I liked that the chapters were short and that I had time to absorb what was happening in each chapter. I found the subject matter really interesting and was waiting for a great gothic story. It didn’t seem to turn out like that though. I had read reviews about the book while I was in the middle of it and those reviewers said that the book seemed like it was missing something or was edited down so it was shorter. I totally agree. I felt the meat of the novel wasn’t there and it left me wondering. I thought the characters were interesting but there was not a lot of depth to them. This especially goes with the character of Lucan. I wish there had of been more character development with him because he would have made an excellent villain. I also feel that I never really figured out what the feud was between Poll and Lucan so that left me a little confused. I feel like the story could have been amazing if more was added to it.

All in all it was an okay read. I don’t know if I would recommend it as there are quite a few other books in the same genre that are much better.