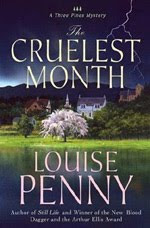 After reading the a Louise Penny mystery a month or so back I went to the library and got another one because I enjoyed this the last one so much! I am not reading them in order but I don’t really feel like it is necessary to understand what is going on. I still haven’t even read the first one from this series!

Amazon.com says, “Chief Insp. Armand Gamache and his team investigate another bizarre crime in the tiny Québec village of Three Pines. As the townspeople gather in the abandoned and perhaps haunted Hadley house for a séance with a visiting psychic, Madeleine Favreau collapses, apparently dead of fright. No one has a harsh word to say about Madeleine, but Gamache knows there's more to the case than meets the eye. Complicating his inquiry are the repercussions of Gamache having accused his popular superior at the Sûreté du Québec of heinous crimes in a previous case. Fearing there might be a mole on his team, Gamache works not only to solve the murder but to clear his name.”

This novel was set in April, when the weather is warming up and the snow is melting. It made me excited to read because it will be April here soon (not that I think the Northwest Territories will exactly be snow free come April!). As I said in previous reviews of this series – I love the way the small town of Three Pines is depicted. It is beautiful and I want to live in a place nestled away from the world but not too far away that I can’t get books! This novel made me want to get a café mocha and sit outside and listen to music or read a wonderful book.

This novel was a bit supernatural, there was accusations of witchcraft and murder. There were some dark points but some really funny ones as well. I feel like I am becoming friends with this characters with every page I read. Gamache is still one of my favorite characters. I love how he treats the people he works with and the people in the community. You can tell the people in Three Pines love him – even if he does investigate a ridiculous amount of murders in such a small town.

I am jumping off the murder-mystery train with the next book I plan on reading – but I cant promise I will be off it for long!