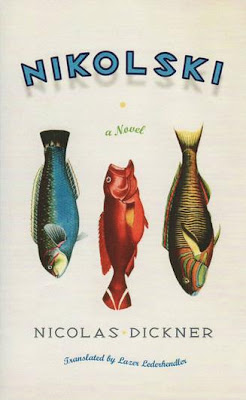 I ordered this book as soon as the Canada Reads list came out in January. I had every intention of reading all of the Canada Reads contestants but didn’t quite get there – in fact I never ended up reading one of them. I guess I was going through I rough reading patch that meant my mind could only handle mysteries. But when the winner was announced last week I decided that it would be my next read. And what a great choice it was.

Amazon.com states, “An odd tale of missed connections, restlessness and the search for home that follows three quirky Montrealites. One story line follows a nameless narrator who works in a second-hand Montreal bookshop and reveres an inexpensive compass sent to him when he was a child by his absent father. Meanwhile, Noah, who grew up in the care of a transient single mother, arrives in Montreal to study archeology and rents a room from the owner of a fish shop. Then there's Joyce, a young woman from a family that claims pirate origins, who washes up in Montreal, finds work in the fish shop and begins her own version of living the family legend. The characters' lives brush up against one another (largely thanks to a book about pirates that, through various personal connections, ends up as the lightly binding force of the three characters' fates) but—in a nice subversion of the intersecting fates arc—don't loudly collide.”

I really enjoyed this book. It took me about 2 days to finish it – the fastest I have read a book in a long time. I love Canadian books – there is something about them that makes me feel proud and happy to be Canadian. I am always looking for pieces of myself in them and get so excited if Nova Scotia is mentioned. This book was mainly set in Montreal and as I have lived there for a few short months I could recognize some of the places. Montreal is a wonderful setting for a novel – there are so many different kinds of people and languages.

I loved all the characters in this book. They were well developed and made me wish the story didn’t end. One of my favorite parts is Noah writing letters to his mom and addressing them General Delivery wherever he thinks she may be now (she is a roamer and never has a fixed address). I think it would be crazy to look randomly at a map and send your mother a letter there. This novel made me realize how randomly we meet people in life but there are some people we are met to meet.

I think this was a great choice for Canada Reads winner – but I haven’t read the other ones yet so my opinion may change afterwards!!

I really love that cover.