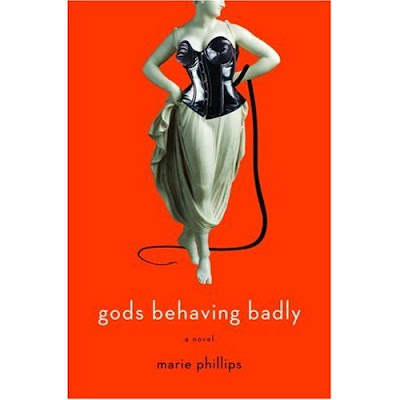 I really had no idea what this book was about when I picked it up at the Yellowknife Library book sale. I knew it was on my To Be Read list so I bought it. I was looking over my book shelves looking for a good read (that wasn’t a mystery as I have been tending to read only those lately and really need to broaden my horizons) and my eyes found this. A friend was over and she said she had read it and that it was hilarious. I thought that was exactly what I needed and I was right!


Amazon.com says, “The Greek gods and goddesses living in a tumbledown house in modern-day London and facing a very serious problem: their powers are waning, and immortality does not seem guaranteed. In between looking for work and keeping house, the ancient family is still up to its oldest pursuit: crossing and double-crossing each other. Apollo, who has been cosmically bored for centuries, has been appearing as a television psychic in a bid for stardom. His aunt Aphrodite, a phone-sex worker, sabotages him by having her son Eros shoot him with an arrow of love, making him fall for a very ordinary mortal-a cleaning woman named Alice, who happens to be in love with Neil, another nice, retiring mortal. When Artemis-the goddess of the moon, chastity and the hunt, who has been working as a dog walker-hires Alice to tidy up, the household is set to combust, and the fate of the world hangs in the balance. Fanciful, humorous and charming, this satire is as sweet as nectar.”

This book made me laugh out loud within the first few pages. It may not be a book for people who are offended easily though. There are some really funny sex scenes between the gods and goddesses and you always have to kind of forget that they are all related some how. I really liked Apollo. He was so self-centered and ridiculous and the most absurd things came from his mouth that I couldn’t stop laughing.

Artemis was also an awesome character. The scene where she has to fight the 3 headed dog of the underworld and how excited she was to do it was really funny. I also loved how she opened up to the mortals by the end of the book and talked with Neil about her own stuff.

Alice was a little too prim and proper for my taste but I do say she was probably needed in the story to balance the dirtiness of the gods and goddesses. I loved the parts of the novel with her in the underworld. I never pictured anything like what she was experiencing before so it made my imagination work a little harder.

All in all it was a really well written fun book. A good laugh and I would definitely recommend it!