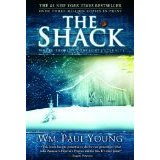 This is a hard review to write. I brought this book on my flight to England yesterday and made the fatal mistake of bringing a book I didn't really know anything about and then I was stuck with it for my entire flight. It was a rookie mistake that I rarely make - I always have a back-up...but not this time.

Amazon.com says "Mackenzie Allen Philips' youngest daughter, Missy, has been abducted during a family vacation and evidence that she may have been brutally murdered is found in an abandoned shack deep in the Oregon wilderness. Four years later in the midst of his Great Sadness, Mack receives a suspicious note, apparently from God, inviting him back to that shack for a weekend. Against his better judgment he arrives as the shack on a wintry afternoon and walk back into his darkest nightmare. What he finds there will change Mack's world forever." My mom bought me this book - as she is a flight attendant and saw a bunch of people reading it on her flights. I don't think she read the back of it so I can't blame her.

I really really didn't like this book. I think I threw it on the empty seat next to me at least 10 times in anger and frustration. The main reason was how poorly written it was. It was choppy and not enjoyable. The way the conversation flowed was not the way people actually speak - it made it hard to read. Though I am not religious, I do think that the idea of the book was interesting and had the potential to be good. People love books like this and it is too bad that it was so hard to get through. I have read loads of reviews on this book since I finished this and at least I feel better knowing I am not the only one who feels this way about this book.

I have to say that "The Shack" by William P. Young was a very thought provoking read.

After reading the book, I was left pondering several things about it – which is a true testament to the book's worth. I had several questions on the validity of some of the descriptions of God but I had to humbly admit that there may be no answers this side of heaven for how God presents Himself to each individual.

I posted a more in-depth review of this book on my own blog www.tracysbooknook.com.