If You Could See Me Now - Cecelia Ahern 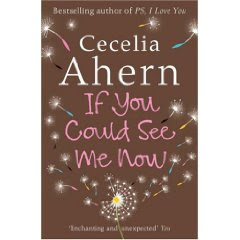 I found this super cute book at in a discount bin in Bodrum. I told myself I was not going to buy anymore books but then I decided I really did need some chick lit. I had read a book by this author previously and really enjoyed it so I was excited to take this to the beach in Greece with me!

Amazon.com says "Living in her own house in a small, posh Irish town, 35-year-old Elizabeth Egan is an uptight interior designer and adoptive mother to her six-year-old nephew, Luke, whose mother, Elizabeth's 23-year-old sister, Saoirse, prefers boozing to parenting. Saoirse's behavior reminds Elizabeth of a painful past—the alcoholic mother who abandoned the family, leaving Elizabeth to care for her baby sister and forgo her own childhood, and the emotionally distant, controlling father still waiting for his wife's return. Unlike the other women in her family, Elizabeth adheres to a fastidiously well-ordered existence—no mess, no complications, no love. But all that changes with the arrival of Ivan, a goofy and spontaneous man intent on infusing much-needed fun and tenderness into Elizabeth's frigid persona. The catch is no one can see this ageless man from the land of "Ekam Eveileb" save Elizabeth and her nephew. Through Ivan, Elizabeth becomes the woman she's always been too afraid to be." It is a book about love and about make-believe.

This book was really fun and really sad at the same time. I found that Cecelia Ahern's novels have such a sadness to them but have a magical aspect that doesn't leave you depressed. I really like that. I loved the character of Ivan. He had such a childlike, carefree quality about him that made me miss being a kid and kind of excited to have my own someday! Life is so serious when you get older that you sometimes forget that the world will not stop spinning if you don't do the laundry or pay the bills on time.

This was a sweet, easy read.

I of course read P.S. I love you and I really, really liked it ( I hated the movie though, the cast was a disappointment, that's not how I imagined the characters). I think that you might like Carrie Adams and her Godmother. I found it similar in writing and in the atmosphere, how it also is sad but doesn't leave you depressed at the end.