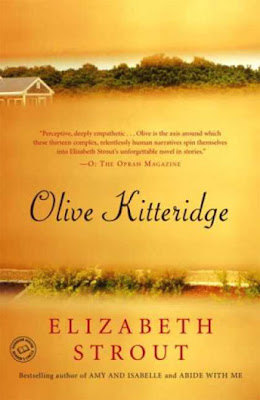 At our local Co-op they have three big bookshelves that are used for a book exchange. I skimmed it a few times but never actually brought any books or saw any I was particularly interested in. The a few weeks ago I say Olive Kitteridge (as well as a Val McDermid novel) on the shelf and had to take it. I promised myself I would bring in two to replace them the next time I came in…..I haven’t yet but promise to next week when I do my next grocery shop. I had heard really good things about this novel. I book friend of mine in Korea loved it so it has been on my list for a while. It took me two days to read it – quite a shorter amount of time then it has taken me to read anything lately.

Amazon.com says, “Heart-wrenching, penetrating portrait of ordinary coastal Mainers living lives of quiet grief intermingled with flashes of human connection. The opening Pharmacy focuses on terse, dry junior high-school teacher Olive Kitteridge and her gregarious pharmacist husband, Henry, both of whom have survived the loss of a psychologically damaged parent, and both of whom suffer painful attractions to co-workers. Their son, Christopher, takes center stage in A Little Burst, which describes his wedding in humorous, somewhat disturbing detail, and in Security, where Olive, in her 70s, visits Christopher and his family in New York. Strout's fiction showcases her ability to reveal through familiar details—the mother-of-the-groom's wedding dress, a grandmother's disapproving observations of how her grandchildren are raised—the seeds of tragedy. Themes of suicide, depression, bad communication, aging and love, run through these stories, none more vivid or touching than Incoming Tide, where Olive chats with former student Kevin Coulson as they watch waitress Patty Howe by the seashore, all three struggling with their own misgivings about life.”

I was surprised that I liked this book so much because it is basically short stories tied together by this one woman, Olive Kitteridge. I usually hate short stories. Actually hate is not the most accurate word because as soon as I see a book is short stories I don’t even bother with it – even if they are by my favorite author. There is something about them that just bothers me. I love the length of novels and the meat to them; I don’t feel I get that with short stories.

This book was sad. There were elements of it that broke my heart and characters that lead such a lonely life that I found it hard to read. I loved that sometimes Olive Kitteridge was a seen presence in the novel and other times it was just her words that stayed with the character. I liked Olive’s character; she was hard-headed and a little mean sometimes but you saw her through her own eyes as well as other characters and got to know her heart and the life she lead. You got to see her heart break when she lost not one but two loves.

I liked this book. It was a good read, not really light but somewhere in the middle.

Considering that they have a decrease overhead than a conventional brick and mortar gambling operation, on the internet gambling locations can be extremely liberal when it comes to a signup reward and ongoing promotions.
asikqq
dewaqq
sumoqq
interqq
pionpoker
bandar ceme
hobiqq
paito warna terlengkap
http://199.30.55.59/dewaqq78/
datahk