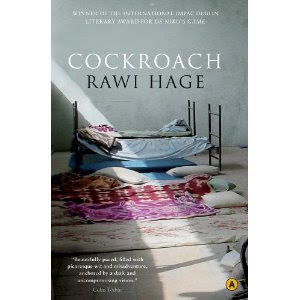 I saw this book at the Winnipeg Airport and as soon as I saw who the author was I knew I had to have it. I had read the first novel by Rawi Hage called DeNiro’s Game when I was living in Turkey. I had borrowed it from a friend who said it was amazing – he was right. I started this one hoping it would be the same.

Amazon.com states, “After trying and failing to kill himself, an unnamed narrator who believes himself to be part cockroach is compelled to attend counseling sessions with an earnest and alluring therapist. As he unspools his personal history—from his apprenticeship with the thief Abou-Roro to the tragic miscalculation that led him to flee his home country—the narrator, reluctant to tell his story (we never learn where the narrator is from, and inconsistencies in his tale cast doubt upon his honesty), scuttles through the stories of others, recounting secrets both confidentially shared and invasively discovered. Unable to support himself on burglary alone, the narrator takes a job as a busboy, but runs into complications after discovering his lover's connection to the restaurant's most prominent customer.”

This book is different from DeNiro’s Game in that it was more of the narrator’s thoughts in the book and less dialogue – and since the narrator is a little bit crazy the thoughts tend to not make much sense sometimes or be really, really aggressive. The narrator is not a very likeable character. He does some things that I found really scary (especially the breaking into homes and stalking people – especially women) and made me look a bit differently at the world. Its always the sign of a good book when it makes you see your surroundings differently – which is strange that it took me a book as I am a social worker and see some really crazy things all the time.

What I really enjoyed about this book was the narrator speaking with his counselor about his past in Lebanon. The things that are common place in Lebanon are so different in Canada. Especially the amount of violence that happens when going through war – and I don’t just mean violence in the country but violence in the home and between people who are friends. There are just so many ways that people live that are foreign to me. I can’t imagine waking up everyday expecting violence and fear. I have read many books that deal with time periods of war but I feel like the current ones hit home even more.

This book was a good read and I would recommend it to people who have some time to go deeply into a novel – and not only be looking for a quick escape.